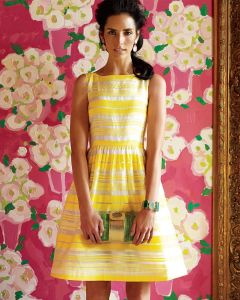 Hello there! I know it’s been a while since I have written my fashion expertise, so is the story when you have finals and summer classes. I want to try out a new segment called “Designer Spotlight” here I’ll focus on the biography/ importance of a specific designer and the effect they have had on the fashion Industry.

I want to start by focusing on one of my favorite designers, Lilly Pulitzer.  Known as the “Queen of Prep”, this brand has expanded by starting with a simple lemonade stand in socialite, Palm Beach Florida.

Lilly married Peter Pulitzer in 1950 (and yes like the Pulitzer prize) opening a lemonade stand shortly after.   She soon realized that her clothes were always stained from working.  As a fashion girl I see how this can cause some concern.

So how did Mrs. Pulitzer handle such a fashion conundrum? Pulitzer decided to avoid ruining her dresses and began to sew her own clothes.  By using fabrics with bright colors and patterns she hid the stains, problem solved!

As a result of her fun designs, many customers were more interested in Lilly’s dresses over the lemonade.  She decided to sell her dresses instead with much success leading and expanding to the brand we know and love today!

The Lilly Pulitzer brand has had its ups and downs over the years since she first went into business.  But what I really want to focus on is the type of clothing she has set up for women. Pulitzer has designed to an open market of socialite girls in the summer time.  All of her looks are feminine, resort, and odds are the colors pink and/or green.  The moment you look at one of her dresses you feel as if you are on vacation, a place I know I would like to be right now.

A wonderful lesson we can learn from Lilly Pulitzer: When life gives you lemons make colorful dresses! 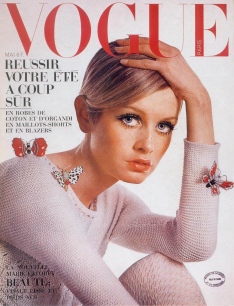 Twiggy, the super model of the swing’ 60’s

It would be ridiculous for me to go on about the entire history of fashion.  There is no doubt that historical, political, and economic events throughout time have had there affect on fashion and the type of clothes we wear today.  But instead of boring you with a history lecture (something I know I would fall asleep too), I’m going to list my favorite top moments of fashion history trivia, so here goes:

1) I’ll start off by taking us to France in the 1700’s.  Marie Antoinette was Queen and with her focus on the importance on fashion, she regularly used something called “fashion babies.”  these were dolls about three feet high used to make mock-ups of her future clothing.  Queen Antoinette woud use a fashion baby to communicate with her designer about various dress wear.  In a way she was the diva of her time.

2)Now I’m going to jump us way forward into the future in to 1940’s U.S.  During World War Two, fabrics like silk were hard to come by because of restrictions on materials over seas.  One solution was to use a synthetic fabric, nylon, for everything (parachutes, army uniforms).   Nylon was a rationed fabric, and was therefore barely worn until after the war was over. 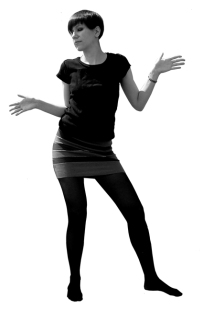 Mary Quant doing a funky dance in her own design, the mini-skirt

4)The micro-mini-skirt was not the only huge fashion moment during the 1960’s.  Models were changing as well.  The model”Twiggy” was rising to fame, and with that changing the look and expectations of young women.  “Twiggy” was a skinny lady and considered the “it” girl of the decade.  Although this was great for Twiggy, this brought about the super skinny models we see every where now.

6)One woman designer I almost forgot to include is Gabriel “Coco” Chanel.  Someone I’m sure you have all heard of, Chanel allowed women to wear powerful looking work suits made of tweed.  And maybe one of her most well known accomplishments is that she designed the first “little black dress” aka the LBD.

I can go on about fashion events throughout history but I will stop here.  What is your favorite moment in style history? Think about what you are wearing right now and where it came from, what is its history?  The next time you buy something that is in trendy, question if it has anything to do with the latest politics or economics, you may learn something new!

I think it is time for me to admit to you my obsession with magazines.  It started when I was about 14.  The glossy pages, the beautiful advertisements and fun layouts.  It was an escape from suburban life, and something I studied more than my textbooks.

Although my love for magazines may sound well, crazy, I have noticed the differences and importance of  each one.  So in case you think all fashion/ girly magazines are the same here is a break down/list of their differences:

1)Lucky Magazine–  Known for shopping, this magazine always comes with a bunch of stickers for you to save pages you like.  It   provides you with “Lucky Breaks” and discounts in the back.  There is also  a decent set of ideas for putting different outfits together.

2)Allure Magazine- My most recent obsession it is all about beauty and make-up.  This is an interesting magazine because it can involve skin care and science which can end up being surprisingly really interesting.

3)Vogue- The fashion mecca of magazines.  This is the grand mac-daddy of everything in the fashion world.  Although extremely glamorous it can be rather pretentious sometimes.  They assume you can afford things you clearly cannot.  Usually great articles too.  Although sometimes I really do not want to read about botox injections.

4)In-Style-  This is a very celebrity driven fashion magazine.  It will show outfits worn by the stars and then tell you how to get it for less.  It keeps it real, and down to earth and is just really relaxing to look at.  But if you love reading interesting articles this is not really the magazine for you.  I recommend it for the beach!

5)Marie Claire-  This happens to be a favorite of mine!  Always has good articles and fashion.  Their main focus is from the viewpoint of fashion, beauty, and career on a world wide level which can be really well awesome.  They also always have quotes from young women in the street describing what they like most about themselves.Inspiring? …Yes!

6)Vanity Fair-  This is for the fashion intellectual.  Many articles in this fashion magazine are politically driven.  They have fierce articles about old hollywood as well.  The humor in this magazine is extremely satirical and it can almost feel like you are reading a newspaper.

Well these are my top six magazines, although the list of girly fashion magazines really can go on!

What I find most fun about magazines besides the obvious articles and fashion advice is the layout and the advertisements.    These 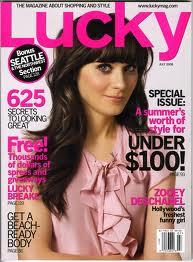 companies are spending millions of dollars on advertising in order to entice us to buy their merchandise.  What makes us want to buy something and why?  Is it simply because it looks pretty, or cool?  Think about this stuff the next time you look at a magazine.  What advertisements are you drawn to and why? Which ones don’t you like? and please feel free to make fun of them, that is half the fun!

I hope this inspires you to pick out the fashion magazine that best fits you! Have fun!

Today I took a short visit to the Fashion Institute of Technology museum.  And as you can guess, I’m writing from somewhere within the New York City area, a city with so much fashion, such little time.  I was expecting to see the usual collection of permanent clothing  and the forever changing temporary exhibit.  But what I got to see was mostly student work.  Since it is the end of the semester, students projects that they had been working hard on all semester were completed and for the most part really beautiful and interesting.

The permanent collection was full of fashion’s ranging anywhere from the 1800’s to the present.While the downstairs collection  changes every semester.  Although I love them both, for some reason I think the downstairs exhibit is creepy .  They play weird music and the lights are always relatively low.  There are guards that are difficult to see at first that pop up as you walk around.  Just a warning….

They usually have free brochures for you to take home about each exhibit as well.  The most recent temporary exhibits I saw were, Lulu Guinness’s personal couture collection and “Ivy League” which was a look at old university fashion.

I once had an opportunity to interview and work for this museum, but I turned it down to pursue other career options. There will always be some regret I’ll have because of that, only because this museum is awesome and I sincerely recommend the trip!  Admission is free, and it is open weekdays from noon-8:00pm

Ok so I just want to be clear about this blog. You will never find the words “omg, this is so cute” and you will never read something pretentious sounding without me explaining it first. Fashion is no excuse to be brainless or to be snooty.  Fashion is something we live in.  It provides us an opportunity to transform ourselves by simply changing our outfits, and yes, it is fun!  I want this to be a down-to-earth blog about style, clothes, and sewing.  There are so many aspects of the industry that can easily go ignored and we do not want to disregard  them.  This is a place to talk about all different aspects of fashion and how fun it is, so lets get cracking!